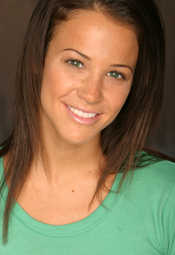 For EVAN COOPER, yoga has become the vehicle for finding peace in the chaotic world of being a girl. Born in Cleveland, Ohio and later raised in Los Angeles, CA, Evan can testify that she endured the pressures of perfection just as much as the next girl, “I was always an academic success, yet I couldn’t understand why I felt so separated from the very world around me.” Having found a cure for dealing with her anxieties, fears and pressures in a healthy way, Evan shares her experiences with the countless children, teens and young women that deal with them daily, in her new book Um, Like…OM: A Girl Goddess’s Guide to Yoga. Though the physical, mental and therapeutic effects of yoga are unquestionable, there was something more that inspired Evan to engage in the ancient practice. In 1995, at the age of 18, Cooper awoke one morning with what she believed to be an eye infection, attributing the irritation to an eyelash having scratched her eye. Her self-diagnosis proved wrong when, only 24 hours later, the irritation took a turn for the worst as her once-clear vision completely vanished into darkness. Blind in one eye, she had unknowingly contracted the virus Optic Neuritis, a precursor to Multiple Sclerosis. Out of desperation and fear, her parents sought out the most prolific doctor available. His prescription for heavy-duty steroid medication, and the guaranteed accompanying side effects, was not the avenue that they had hoped to take. Searching for a miracle, they put their trust in a homeopathic doctor who changed Evan’s life forever with one simple word: yoga.

As prescribed by her doctor, Evan’s attempted recovery consisted of Kundalini Yoga, an ancient and synergistic form of yoga practiced for centuries in India and the East. After one class she was hooked. Not only did it challenge her physically, but she instantly felt a greater calmness, clarity, and an understanding of the connection between mind and body. Disciplining herself to these yoga postures every day for 12 weeks, Evan miraculously regained her sight and was finally able to see clearly.

Having fully recovered from such an unexpected and unbelievable obstacle, Evan graduated four years later from UCLA with Phi Beta Kappa honors, earning a Bachelor of Arts degree in English. Though she could not foresee how her future would play out, she knew that yoga would remain an integral part of it. While teaching yoga classes part-time, Cooper pursued her interest in the entertainment industry, first working for a production company, then eventually earning a job as a celebrity reporter for US Weekly magazine. Though her Los Angeles lifestyle sustained her just fine, she ended each day feeling unfulfilled. Noticing that she did not seem quite interested in the sometimes-superficial follies of celebrity reporting, her editor poised the question that changed her life: “What is your passion?” Cooper had no trouble answering right away. Her passion was yoga.

He encouraged her to utilize her writing talent and express her passion in a way that would positively impact others. At the time, Evan was providing yoga lessons to young girls, catering her techniques so they would pertain to them, which enabled her to reach their same level. By trading in her tranquil music for pop and hip-hop, and modifying her mantras to relate to their issues, Evan was able to effectively connect with her students while sharing her passion. Her editor’s words of wisdom had struck a chord, and Evan resolved to combine her writing skills and enthusiasm for yoga to benefit children, girls and young women, alike. Yoga had granted her inner peace, and Evan wanted to share what had given her the confidence to overcome life’s obstacles.

Evan Cooper has trained in Hatha Yoga, in which she immersed herself in meditation, study and practice. A certified yoga instructor, Evan has studied with masters of yoga, including Ana Forrest, Saul David Raye, Max Strom, Shiva Rea, and Sarah Powers. She has been a yoga instructor for 10 years, and currently teaches children as young as 4-years-old to adults, offering various private lessons, school sessions and classes in Los Angeles. 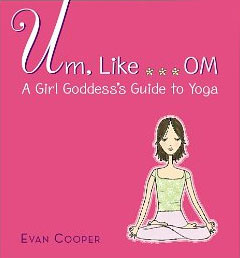 “Welcome to my world: the world of Evan Cooper. I understand what it feels like when the right boys don’t call you back or your divorced parents drive you nuts; when friends let you down or act weird around you; when your hair is curly rather than straight, or you never seem to have enough money for the cool clothes you want. SOUND FAMILIAR? Probably about as familiar as MTV reality shows!”